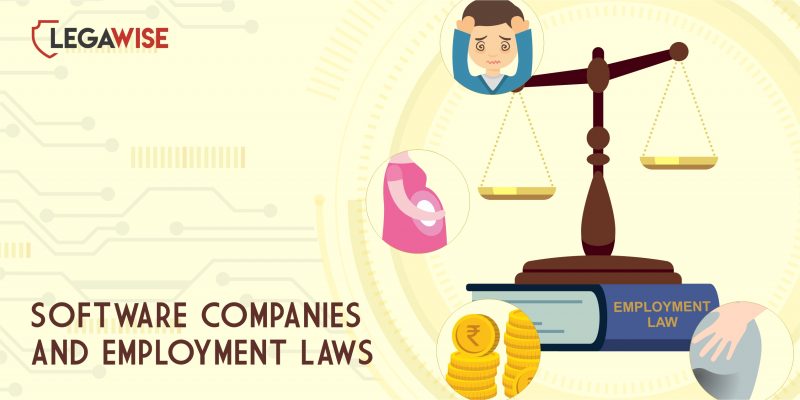 When IT startups rely on hearsay and incorrect information to draw up their employment contracts and employment policies, they are not only paving way for future legal troubles but also losing on their own rights in the bargain. There seems to be a general misconception that the Information Technology (IT) industry is exempt from employment and labour laws when in fact, most of the Employment or Labour Laws which are applicable to the other industries are also applicable to the IT and ITES companies.

Employment and Labour Laws or Industrial Laws are laws that deal with employment, employer-employee relationship, disputes in employment, payment of wages and other benefits and other labour welfare laws. Following are some important employment laws that bind software companies.

The Provident Fund Act applies to any establishment employing twenty or more persons and it is the employer’s responsibility to ensure compliance with the provisions under Provident Fund Act. 12% of the Basic, DA, and cash value of food allowances have to be contributed by the employer and employee each to the EPF account of the employee.

As a good practice, not only IT establishments but also other companies and establishments today insist on new employees contributing to the Provident Fund since it is a good saving and security scheme.

The Employees’ State Insurance Act, 1948
The ESI Act is a self-financing social security scheme to provide protection to workers and their dependents in contingencies such as sickness, maternity, death, disablement, or occupational disease. Being a self-financing scheme, the ESI funds are primarily built out of contribution from employers and employees payable monthly at a fixed percentage of wages paid. The Ministry of Labour and Employment issued a notification in December 2016 increasing the wage limit for coverage under the ESI Act to Rs. 21,000. Which means that in the establishments having more than 10 employees within a notified geographical area, all employees with wages below Rs. 21,000 can avail the benefit of ESI. Those employees who are not covered by ESI Act can avail of the benefit under the Employees’ Compensation Act, 1923.

The Payment of Bonus Act, 1965
The Payment of Bonus Act applies to every factory and establishment which employs 20 or more persons. The statutory bonus payable under this enactment is as a matter of right and not linked to the performance of the employee. The Act lays down a scheme for the calculation of bonus, payment of maximum and minimum bonus, deductions from the bonus, etc. Recently, the wage threshold for determining the eligibility of employees has been revised from Rs. 10,000 to Rs. 21,000 per month, thereby bringing a larger pool of employees under the coverage of the Act.

Equal Remuneration Act, 1976
This enactment ensures adequate remuneration which must be made irrespective of the physical strength of employee and on the ground of sex.The Act provides that employers cannot discriminate against men and women in matters of recruitment. By a notification in March 1977, the Government has brought ‘Data processing and tabulating services’ under the ambit of the Act thereby bringing IT and ITES industries in its sweep. In addition to equal opportunity provisions, the Act makes the Employer responsible to pay equal remuneration to men and women workers for same work or work of a similar nature.

Industrial Employment (Standing Orders) Act, 1946
The Industrial Employment (Standing Orders) Act, 1946, covers industrial establishments wherein 100 or more workmen are employed with the discretion of the state government to apply it to establishments with lesser employees. The object of the Act is to require employers in industrial establishments to define with sufficient precision the rules and conditions of employment under them and to make them known to workmen/employees. Some states such as Karnataka have exempted the IT and ITES companies from the application of this Act.

The Maternity Benefit Act, 1961
The Maternity Benefit Act is enacted for the benefit of working women who are pregnant, or have given birth or suffered a miscarriage. This Act is based on the moral that when a woman gives birth, she does it not only for herself but for the whole society.
The Act applies to any establishment in which 10 or more persons are employed, or were employed, on any day of the preceding 12 months. It is not necessary that there must be a minimum of 10 women in an establishment for the Act to apply. The Act applies to all establishments employing 10 or more persons, including at least one woman.

The Sexual Harassment of Women at Workplace (Prevention, Prohibition, and Redressal) Act, 2013
The Sexual Harassment of Women at Workplace (Prevention, Prohibition, and Redressal) Act, 2013 was brought into force from December 2013 to have a comprehensive legal framework for the protection of women at workplaces. The Act makes it the responsibility of the Employer to protect women against sexual harassment at all the workplaces, be it in public or private. Employers are liable to constitute Internal Complaints Committees (“ICC”) at each office or branch, of an organization employing at least 10 employees. The Act defines sexual harassment as sexual coloured remarks, demand or request for sexual favours, showing pornography, unwelcome physical, verbal, non-verbal sexual conduct and uninvited physical contact and advances. The Act has laid down detailed procedure for dealing with complaints and enquiries, protection of victims and prescribes punishment for sexual harassment and also punishes false complaints of harassment. Noncompliance with this Act may invite a fine of up to Rs 50,000/- upon the employer and also cancellation of license to carry out business activities.

In addition to the above enactments, other laws such as the Employment Exchanges (Compulsory Notification of Vacancies) Act, 1959, the Minimum Wages Act, the Payment of Gratuity Act are also applicable to the IT and ITES companies.

Please contact Legawise for assistance in drawing up employment documentation and policies for your employees.

Independent Contractor Agreement for IT and ITES Companies